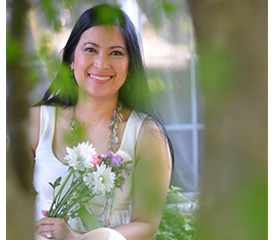 Originally born on the island of Bohol in the Philippines, Malou moved to the US in 1992 and
established residence in California, later moving to Charlotte in the spring of 1999 with her
husband and two daughters. She immediately became involved with the Filipino American
Community of Charlotte (FACC), where she has been a performer and a choreographer for
many years, and is a former Vice President of the FACC

Her love for fashion and the arts began when she was 10 years of age, spending a few weeks
of her summer vacation with her relatives in Cebu City. She observed her great aunt Marion
making an outfit with yarn and a silver needle. She learned the basic patterns of crochet, and
used her imagination to create her own designs.

Malou’s artistic side emerged in designing and making clothes, hats, dolls, shawls, Christmas
ornaments and blankets, for family and friends. As she and her daughters became involved
in community outreach and in performing classical Filipino folk dances, she began making her
daughters traditional and modern Filipino dresses and costumes, and developed her skills as a
seamstress and designer. This is Malou’s third year participating in the Charlotte Seen fashion shows.

Interested in being apart of New York Fashion Week or Charlotte Fashion Week? Are you a Designer, a Boutique, Hair and Make up Artist, a Performer, an Artist or you wish to Volunteer… write us at info@charlotteseen.com

Attention models a few spots on the runway open...

My name is Cheyenne Sandoval. I'm 19 and from Hick

No registration fees, no model fees THE MODEL SE

Does anyone know who this amazing little girl is?